The 11the century religious complex Goa Gajah is located on the road from Peliatan (Ubud) to Bedulu. If you want to go sightseeing then this is definitely worth a stop.

On our visit, we were lucky to see a large group of people busy preparing for a ceremony. Women were sitting together and making all kinds of decorations from flowers and leaves. The men were in the back cooking a feast meal.

It was a delightful and harmonious feeling to see how the Balinese still use this ancient place for many ceremonies. The setting looked like we had just entered an open-air museum and life had been left unchanged for decades.

While it gives a different impression to see the Balinese conducting preparations, I believe this temple is still very mystical if it was to be deserted. It is beautifully surrounded by green vegetation and rice fields.

Unknown Origin of the Cave

This is one of the sites where archeologists still haven’t pinpointed its exact origins and purpose. The cave was built in the 11th century, which is well before the Majapahit arrived in Bali.

The mixture of Hindu and Buddist relics indicated the beginnings of the unique religion that the Balinese still hold today. It is considered a meditation site.

Goa Gajah means Elephant cave. In 1923 Dutch archaeologists rediscovered the temple after hearing local people describing a cave with a monstrous elephant head. The head turned out to represent a demon and not an elephant.

Two decades later, in 1945 the fountains and a bathing pool were discovered just in front of the cave. It is believed that they are more than 1000 years old.

Today the big bathing pool has been renovated and is very eye-catching. The pool is divided into two sections: one is a bathing area for Balinese women and one for Balinese men. 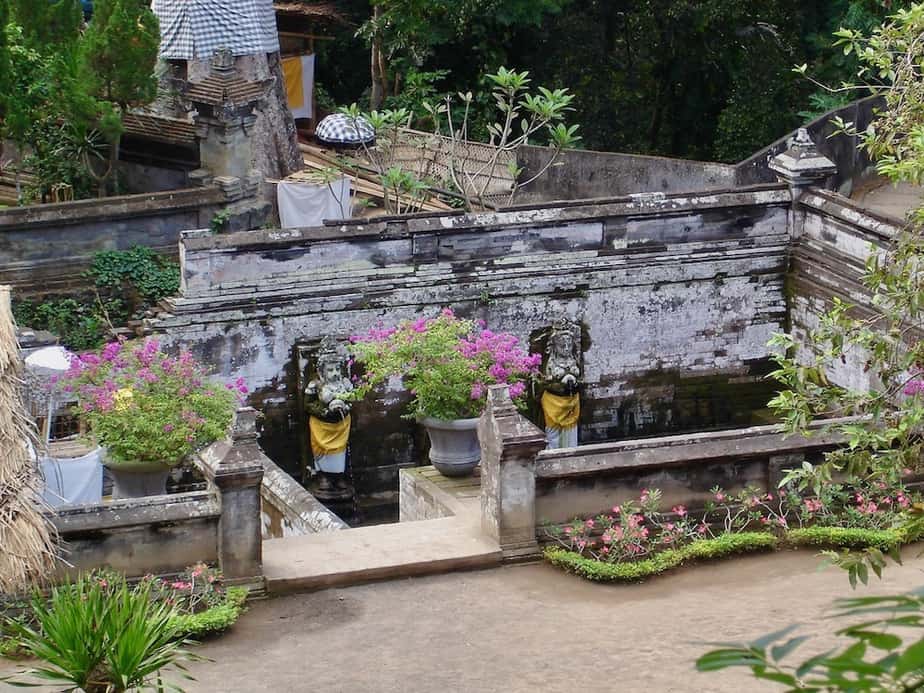 The 6 real size statues are holding jugs from which holy water flows into the pool. Originally 7, these statues represent 7 holy Sapta Nadi. Just as the 7 sacred rivers that flow in India: Gangga, Sindhu, Saraswati, Yamuna, Godawari, Serayu, and the Narmada.

The pilgrims would wash at these pools before entering the cave for meditation.

Where does the name Goa Gajah come from?

Just like its origins, the name of the temple also remains unknown. As mentioned, Goa Gajah means Elephant Cave. But funny enough, elephants have never lived in Bali.

Some say the Dutch colonial who rediscovered the temple complex in 1923  interpreted the statue at the entrance of the cave as an elephant. And so this is one of the theories where the site got its name from.

Others claim that the cave is named after the elephant statue of Ganesha, which is found in the cave. But we have also read a theory in which the impressive cave entrance presumably represents the huge mouth of the earth god Bhoma or the witch Rangda, or the mix of two.

The Balinese have their own legend describing how the giant Kebo Iwa scratched the Goa Gajah with his long strong fingernails. He was also responsible for the creations of the nearby complex Gunung Kawi and Goa Lawah.

So as you can tell, there are still many unanswered questions. to the cave

Visible influences of Hinduism and Buddhism

The statue of Ganesha in the cave shows the presence of Hinduism, while the statues of the goddess Harita just southeast of the cave indicates that Buddhism played a role as well.

Other signs show that there is no doubt the cave has a connection with Java island. There are Old Javanese inscriptions and the meditation chambers inside the cave are similar to those found in Java just as the nymphs in the bathing pool.

These statues show signs of Buddhist and Hindu influences and identical statues are also found in other bathing pools in Java.

When you pass the entrance a long staircase will lead you to the temple grounds. From here you have a beautiful view of the entire site.

Visitors are able to wander around the historical complex. It’s a beautiful place to walk over the bridges and along the rivers.

When we were there a Balinese man offered to take us for a small tour through the forest which ended at a nearby village temple.

From here it is possible to reach Yeh Puluh, where similar elephant figures of Ganesha are found which indicates a relationship between the two complexes.

Don’t forget to agree on an appropriate fee with the so-called guide first, just to avoid unpleasant surprises 🙂

All in all, try to put this ancient site on your list of things to see when traveling through central Bali. The best time to visit is early in the morning when the tourist buses haven’t arrived yet.